My Mommy Is Better than Yours 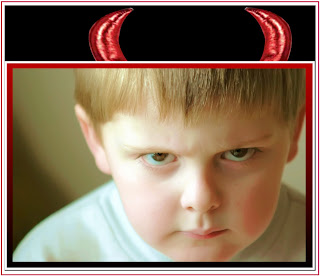 I knew my daughter, Katie, would be a far more charitable parent than I when she was twelve. It was while she was babysitting our four-year old neighbor, Laurie, an outspoken, precocious child. You know the type. The over-indulged genius-spawns who are taught that adult conversation is of minimal significance, and interrupting a discussion about mortgage meltdowns or the President meeting with dignitaries in the Middle East with such earth-shattering news as, Mommy, see? I made the letter L, is a far more critical issue in the scheme of world events.

Such children are encouraged to speak their minds – no matter what. They’ll stare into a poor soul’s face and say, That fat man looks like a gorilla – when he unfortunately does – and the mother, in her need to take every opportunity to reinforce her child’s powers of perception and add yet another word to the child’s burgeoning, somewhat annoying, vocabulary, responds with, Yes, Honey-Bunch, aren’t you the observant one! Observant means you see things very accurately, “accurately” having been taught the day before during dinner while the family contrasted the various green shades of arugula, pesto, and blanched broccoli.

Katie bent down to buckle Laurie’s Mary Janes. The little imp held onto Katie’s shoulder with her right hand, pointed at me with her left, and announced, in her usual whiny tone, “I don’t like you. You’re mean.” Then she put her hand on her hip and said to the top of Katie’s head, “I like my mommy better than yours.”

My first impulse was to reproach this insufferable undersized snot with, Hey, you spoiled brat, that’s no way to talk. Don’t your parents teach you to be polite? Oh, and polite means nice – as in times you aren’t spanked, when Katie piped up with a soft, “Of course you do. She’s your own mommy. Everyone loves his or her own mommy best. I love my mommy best of all, too.” Katie looked up at me and smiled as she pushed the leather strap through the buckle. “There, Laurie. You’re all set. Let’s go for our walk.”

That was it. No blame, no recriminations, no scolding. Just appreciation and that esteemed attribute, so necessary in parenting - pure acceptance. Chagrinned, I snapped my jaw shut and reflected on the difference between my at-the-ready disapproving response and Katie’s generous one.

Pandering to over-pampered children has never been my forte. Perhaps it’s because I taught school for so many years and encountered bunches of coddled kids whose parents thought their children’s proverbial shit didn’t smell. They say teachers don’t have pets. Well, they do - and their pets are those kids who respect the world and the people in it. Actually, truth be told, teachers’ pets are those kids whose parents are so aware of their child’s malodorous shit, they’ll tell you themselves.

I remember one seventh-grade boy in particular. Ryan. This kid’s sneer suggested he possessed information only the devil could appreciate - and his swagger suggested he was about to act on it. He disrupted class with sniggering, throwing stuff, and just acting like a smart ass most of the time.

The boy was bad enough, but it was his mother who really pissed me off. She worked as a nurse’s aide in a nearby middle school, so you’d think she’d be sensitive to the typical shenanigans of twelve-year-olds, and perhaps even be aware of the appalling behaviors of her own son. She wasn’t.

One day I was forced to discipline Ryan for blatant insubordination and outright defiance. He was to stay after school for a thirty-minute “meeting” with me to review his disobedient classroom behavior and come up with a plan for improvement.

However, it was a policy in my school district to notify, in writing, in advance, the parent of any child who was to serve an after-school detention – no matter what. That meant I had to fill out a Disciplinary Notice of Non-Compliance and document the child’s name, grade, advisor, date, what the child had done, when he had done it, where he had done it, why his behavior was considered out of compliance with the school’s Code of Conduct, and what disciplinary measures I would be taking to help improve the child’s wayward behaviors and over-all school deportment.

So I did. I filled out the form and gave it to Ryan after class, telling him that he had to take home the form, have his mom read and sign it, bring it back in the morning, and then stay after school with me the next afternoon to develop his Improvement Plan.

“I’m not staying after school tomorrow.” He grinned. “You wait and see.” He grabbed the form and walked off.

Early the next day I received a phone call from Ryan’s mother. “How dare you try to keep my son after school? Who do you think you are?”

Startled, I took a second to regroup, and then said in my most welcoming voice, “Oh . . . Hi . . .Mrs. Hollister. Thanks for calling. Did you see the disciplinary form I sent home with Ryan yesterday?”

“You’re damned right I saw it. I got the form right here in front of me. What do you mean by non-compliant and defiant?”

“What do you think, I’m an idiot? I know what non-compliant and defiant mean.”

“You asked what they meant.”

“No, I want to know why you wrote non-compliant and defiant on this God-damned form! He’s just a kid. He’s twelve years old for Christ sake.”

“He disrupts my class.”

“He’s an active boy. He enjoys life. You teachers are all alike. You people just want robots in your classrooms.”

“He is rude and disrespectful. He shouts out obscenities, he walks around the room during our lessons, he’s mean to the other students - he takes their things.”

“I don’t call that non-compliant. Or defiant. That’s just energy. And I don’t appreciate your writing anything like that on this form here. I’m throwing this away, and you better get rid of yours. It’s not to go into any file. You’re out of line. And he’s not staying after school.”

My heart started to pound. I could feel my emotional state begin to disintegrate. Built-up hostility and rancor toward all those parents who defended the monstrous actions of their terrible children took over my ability to reason. Any good judgment I had stored up became useless -paralyzed. My mouth opened and the awful truth poured out of me as never before in my entire career. I couldn’t hold back.

“Mrs. Hollister,” I said, “I think you should pay more attention to your son’s colossally obnoxious behavior than the wording on the disciplinary form. He’s a shit-faced spoiled brat and one of these days someone is going to whack him up-side the head. You are a coddling mother who thinks her kid’s poop doesn’t stink. And because of your inability to see the oversized layers of crap in your precious juvenile delinquent of a son, he will either end up in the local detention center for youthful criminals or get pitched into a backyard garbage dumpster before he’s old enough to see an R-Rated movie. Oh and by the way, I will deny ever saying any of this to you.”

She may have tried to interrupt me during this harangue, but I kept on in a flurry, fueled by years of pent-up adrenaline and bad-will toward inadequate parenting. Then I hung up. A rush of blood flooded my face and burned my ears. I had to remind myself to breathe. It took several minutes to settle into a modicum of my usual teacher mode and attitude, but then, throughout the rest of the morning, I felt strangely calm, as though I had just risen from a deep-tissue, full-body massage.

I was called into the office later in the day. Since Mrs. Hollister had a reputation for being an insufferable, over-protective parent, and I had a reputation for being a fair, honest, and gracious teacher, her accusations didn’t get very far. My conference with the principal turned out fine. “What did she say I said? Really? That’s terrible! Imagine.” And so on. Poor Mrs. Hollister. No credibility. No resolution.

And Ryan? He still acted like a jerk in my classroom, and I still tried, albeit unsuccessfully, to guide him into becoming a citizen of the world – without his mother’s help. I figured it was best to steer clear of her. Between his seventh and eighth grade years, Ryan and his mom moved to Reno, Nevada. They are now probably quite prosperous, grifting their way through small-town America.

My daughter continues to be charitable toward children. And I continue to believe most of them need lessons in civility.