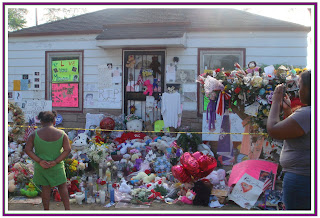 Gaudy bouquets of sagging paper roses fall into the weeds. Wrinkled posters scrawled with “Rest In Peace,” and “I will love you forever,” written in black magic marker above a distorted sketch of his face - the ink, purple from rain and dew, bleeds across the page. Candles, balloons, American flags, and melted candy lump together in piles. Stuffed animals - bears and tigers and dogs - with faded bows and grubby, matted fur, are topsy-turvy, tossed among crumpled sympathy cards and hand-written notes.

Slumped mourners take snapshots of each other, marking history and capturing tears of personal loss in front of the twisted, yellow Do Not Cross police barrier, stretched from the fence and around the stubby tree - jammed with soggy dolls, hand-made gifts, and toys – into the bareness of the backyard.

And across the street, protected from the hot sun and rain by black and white striped tent awnings, card tables are stacked with souvenirs - over-sized t-shirts, CD’s, and DVD’s - each on sale for the low, low price of $15.00. “Get your t-shirts here!” Seems like a deal. Mourners pocket their cameras and hold up t-shirts to their chests. “Do you think I look best in this one? Or this one?” Boom boxes at top volume play “I’ll Be There,” and “Thriller,” and “Billy Jean.”

He was just a kid. A cute, black kid. One of nine - all squeezed together in a foursquare shack – all trying to find space, like too many broken crayons shoved into a torn, over-used box.

He was just a kid. Handsome. Talented. Could he sing! And dance! He was the best of the five. He was the lead. Still . . . just a kid. And all the while, they say, as he was growing up, they say, he was filled with fear. He cried and endured the onslaughts of an abusive dad.

He and his brothers were very well behaved. Their dad made sure of that. No playtime, no running around the backyard, no friends, not even real school – just rehearse and perform. Rehearse and perform. Entering contests. Winning competitions. Entertaining the patrons of black nightclubs from Chicago to DC. Then Motown. Then LA. Then Neverland. Then . . . what?

He was just a kid who grew from a sweet, round-faced Gary, Indiana, toddler into an exceptional and celebrated entertainer and into stardom and world-wide fame and then into a grotesque, disfigured, emaciated man-child who liked to spread love by sleeping with little boys after serving them the wine he called “Jesus Juice.”

That tiny, garage-shaped home –an empty, rotting, paint-chipped, clapboard house - now the backdrop of a massive mound of tributes to the one who had captured the hearts of devoted fans and had filled the pocketbooks of enabling promoters and had satisfied the photo-lust of the paparazzi and had crammed the agenda of the media and then, after years of mystery, and innuendo, and hanging his baby over a balcony, and being tried for pedophilia, and reshaping his body into a sculpture so skeletal and so removed from the robust cherubic-like child he had been, had finally given the world the option to ignore his misdeeds, his over-spending, his drug use, and his scandalous behaviors.

He had given the world a final performance – one that would wipe his tainted slate clean – one that would allow him to rise out of the mire he made of his life and ride new waves of esteem and veneration – one that would crescendo him into virtual saint-dom: an extraordinary, untimely, unrehearsed death.