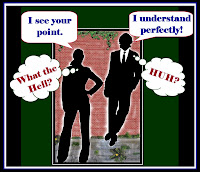 Early in our marriage, whenever my husband and I disagreed, we’d argue to the point of verbal warfare. There’d be name-calling, accusations, recriminations. Issues became cosmic. It took days to get beyond the bitterness and resentment.

I started many of the arguments masking my agenda in a cunningly intoned, “I have a question,” which set Ed’s teeth on edge and put his guilt reflexes into high alert. He had learned that this was a loaded opener - the precursor to a kick-in-the-gut combat question: “Why do you always . . . ?” or “How come you never . . . ?”

I admit it was weasely to start trouble by announcing an accusatory question. I reasoned that hinting at a transgression gave Ed just enough lead time to marshal a generic defense, eliminating any need for a fight - “Oh, I’m sorry for (fill in the blank). Did that cause a problem for you?” Aside from this blame-eating reply, there were few responses I’d accept. He was wrong. I was right. Ed resorted to sarcasm, and I’d admonish him, tossing in belligerence and scorn for good measure. We became trapped in cyclical point–counterpoint condemnation.

These lose-lose fights left us exasperated and confused. Once we stuck pins into each other’s balloons, we didn’t know how to fix the holes. I’d develop a headache. Ed grew silent, very silent. It wasn’t good. We needed a change.

It was during the late 70’s – that period reeling from the aftermath of the Vietnam War - when Ed and I discovered improved ways of communicating. Our country was beginning to heal its civic wounds in the wake of national unrest. Conflict resolution and sensitivity training promoted by peace-not-war Flower Children trickled into the households of mainstream America. Haight-Ashbury hippies roused from their stupors, studied win-win communication, and sought employment with family health plans and retirement benefits. The Civil Rights and Women’s Movements gained momentum, causing society to rethink the consequences of inequality, stereotyping, and sexist language. I-messages became popular. And we discovered the benefits of Carl Rogers’ Client-Centered Therapy.

This non-directive approach to counseling entered our lives through a series of classes we took for our graduate degrees. Client-centered therapists aren’t manipulative. They ask very few questions, and they don’t tell their clients what to do, what to think, what to change, or what to believe. We appreciated that people in client-centered therapy could retain their dignity while focusing on uncomfortable issues such as hating their fathers or feeling inferior to their children. It was bad enough that people had to admit they were nuts. They shouldn’t also be subjected to the intimidating strategies of an aloof psychoanalyst, writing interpretations on a notepad, making diagnoses, and offering condescending treatment plans based upon coerced answers to embarrassing questions. “Hmm, mm. And how spastic are your bowels during these times of stress?”

Ed and I realized we were pseudo-psychologists in our day-to-day relationship, scrutinizing each other, as though studying rat behavior in a lab maze. We interpreted and diagnosed. We bullied each other into acknowledging transgressions, and I connived my way into heart-to-heart, I’m right - you’re wrong squabbles. But within client-centered therapy and a compilation of win-win, conflict resolution, sensitivity training, non-stereotyping language, and I-messages, we found a bag load of resources to help us devise a new approach to everyday conversation.

We created a home-based, spouse-centered system of communicating. We’d respect each other’s points-of-view. We’d keep our emotions stable, our feelings balanced. Our differences of opinion would be settled through negotiation, compromise, and productive decision-making. We’d be in Talk Heaven.

There were ground rules. No angry outbursts, no recriminations. No telling the other what to think or how to behave. No guilt trips. No accusatory questions. Keep it win-win.

So it began. We expressed ourselves through courteous I-messages and acknowledged each other’s feelings.

“I feel a little annoyed when the driver’s seat isn’t pushed back after you drive the car.”

“I hear you, Ed. It sounds like your legs might get all scrunched up. I don’t mean to cause you discomfort. I’ll be sure to remember next time.”

“Thanks, Sweets. I’m glad you understand.”

We engaged in positive discourse through mutual respect and understanding.

“I feel somewhat neglected when you watch football all night.”

“I hear you, El. It’s good to know how you feel about my sports channel. When this game is over, let’s pick a show to watch together.”

“I feel just a tad frustrated that we’re moving so slowly down each aisle. I’m kind of anxious to get home.”

“Thanks for expressing your feelings. I gather you’d like me to stop looking for so many labels. I’ll try to speed up.”

“Great, and to be honest, I kind of already know how much sugar I’m ingesting.”

“I feel really disappointed that you didn’t come into the store with me. I could have used your help.”

“Got it! I see it disturbs you that I might find it more enjoyable to listen to the radio in the quiet of the car instead of traipsing through the store with you again.”

“You seem to understand. I hope you listened to something really interesting while I did all the shopping.”

“It aggravates me that we came for a dinner party and now we’re listening to some pitch to give money. I must have missed something in the invitation.”

“I hear you. Apparently this charitable event upsets you.”

“I should have stayed home.”

“Of course you hear me, unless you’ve got shit in your ears.”

There are times when abject failure tickles the soul. If I remember correctly, a giggle rose from my gut and burst through the grin I couldn’t suppress. Ed snickered. In recognition of the ridiculous, we collapsed into fits of cleansing laughter.

We had been trying to enlighten our marriage by solving problems of the heart with intellectual gibberish and text book terminology. Our spirits had become lost in a quagmire of artificial I-messages and contrived reflective listening exchanges. Attempts to follow the rules had made us automatons reading from a stoic script written for witless actors.

We missed our intimate relationship with all its foibles and emotional turmoil. It was time to revisit good old arguing - with some modifications. We separated the pitfalls from the benefits of our new-fangled strategies. Dump insipid collaboration. Keep negotiation and cooperation. Dump the gravity. Keep the humor. Dump the pretense. Keep the truth.

Now, when Ed and I have a concern, we get right to the point. I don’t start arguments with a sneaky “I have a question,” and we don’t pretend everything is hunky-dory when we’d rather wring each other’s neck. It’s almost Talk Heaven.