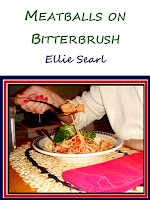 It’s remarkable what an aroma can do. Just a whiff of Italian cooking takes my thoughts across the country to a little spot of heaven and a life-changing adventure in the Pacific Northwest. My journey started at the curb of Seattle’s United Departures where Dick and Carol handed me the keys.

"Call us if you have trouble. Don’t forget - you’ll be out of cell range and radio reception once you start up the pass. The instructions for Sirrus are in the glove compartment. Have fun on your adventure, Kiddo. The kerosene lamp is always full. Help yourself to the rum in the freezer. Do you remember where the generator is? . . . Watch out for the deer . . .and the hunters. Wear red.”

The groceries purchased at a little IGA rattled around as I drove toward the mountains. I should have packed better, but I was in a hurry to catch the last sharp images of the waning October afternoon. Bottles collided with each other and against my suitcases. The pungent odor of deli peppers and dill pickles filled the SUV; I hoped sloshed drippings weren’t saturating the carpet.

I meandered up the winding roads on the west side of North Cascades Highway toward Washington Pass. Autumn splendor dotted the landscape with copper and rust. Shafts of sunlight streamed t 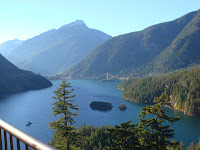 hrough splits in the valleys. I stopped at look-out points to photograph breathtaking golden panoramas. The intense clarity of the late October afternoon made this one-woman-adventure-into-the-wilderness exciting and celebratory.

I was on my way to house-sit Dick and Carol’s isolated cabin in the mountains while they sailed in the Caribbean. Their Golden Retriever, River, had been placed in a kennel, so I wouldn’t be required to dog-sit as well. One time I dog-sat for my other brother's two dogs, and after that, dog-sitting was about as agreeable to me as swimming in oatmeal. Even though there would be one dog, not two, and even though River wasn’t deaf and blind, didn’t ooze puss from his eyes, didn’t need eye drops, didn’t take four varieties of pills wrapped in bread - or stuck in peanut butter - or mushed into soggy dog food, and didn’t chase around the pool yelping at swimmers, I still refused. I did, however, agree to take care of the cat, Cricket, despite the fact that she was deteriorating from old age and a weak kidney. I knew that Cricket was afraid of people and wouldn’t show her face until I had moved around the cabin for at least four days. And cats, sick or not, take care of themselves – as long as they can locate their food, water, and litter box. She was my kind of companion.

I took too much time admiring the changing colors of fading daylight. When the sun finally slid behind the stillness of Lake Diablo, dusk, combined with looming mountain shadows, made driving menacing. The lack of guardrails at outcroppings floating over vertical drop-offs swept away the casual security I had felt just a few hours earlier. I was nervous. The smell of onions, garlic, and pickle juice was strong and nauseating. By the time I crested Washington Pass and started down the steep-graded s-curves, it was pitch dark. The SUV veered around twists in the highway just a few feet from precipitous ledges that hovered over sharp drops to the valley floor.

I rounded the bend where, according to my brother, some kids careened to their death because they weren’t paying attention. As excited as I had been by the exquisite views a few hours before, I couldn’t look. I clutched the wheel and kept my eyes on the road. Headlights beamed on red and brown where evergreen should have been. The dull colors were out of sync with postcard prettiness. A sense of doom magnified my already waning excitement, and I worried that global warming and infectious diseases were destroying the pine forests of the Pacific Northwest. I began thinking that my venture into the unknown was not such a bright idea. Perhaps I shouldn’t have left the company and comfort of my husband and home in Chicago to sail out on my own to this god-forsaken, desolate place. Not even the trees knew how to stay alive.

After convincing myself that those unfortunate dead kids were brainless blockheads on a drunken binge, I navigated the curves with invented courage - easing and braking, easing and braking - down the east side of the mountain, along the river, and then finally, up a steep rise to the safety of the cabin on Bitterbrush Road.

The night was eerily quiet, except for the stones crunching under my feet and a slight swish of branches high over head. Ebony stillness surrounded me. A symphony of stars in sparkling constellations I couldn’t name shone on me with mysterious silent glory from an inky sky. Gentle breezes nudged pine needles and oak leaves into singing their tree-songs. Cool air carried the scents of spruce and cedar.

I entered the warmth of the cabin and the joy of my brother’s life with Carol. I found a welcome note and house instructions beside a red and white striped bowl filled with Bombay Sapphire Gin, Martini and Rossi Dry Vermouth, a jar of olives, and a cut-crystal cocktail glass. The greeting was sweet and gracious. I placed the martini makings on the painted pine hutch next to the already-flowering Christmas cactus. Night magnificence, forest calm, and cabin lamplight revitalized me after that long, unnerving drive over Washington Pass in the dark. I opened a bottle of Champagne, drank a toast to my journey, and with glass in hand, searched for Cricket among the nooks, crannies, and quilts of her home.
, 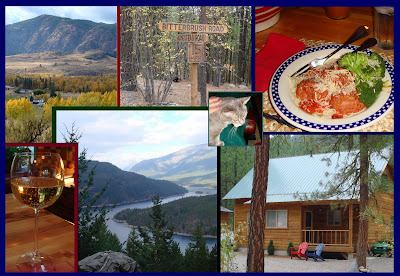 In the next three weeks I would go to the farmers market in Twisp and buy sunflowers and home-made, orchard-fresh peach pie from the 85-year-old woman who baked it, pastries from the Cinnamon Twisp Bakery, and double-churned ice cream from Sheri's Sweet Shoppe. I would visit the Winthrop Art Gallery and watch glass being sculpted into vases and bowls. I would drive along the Columbia River and marvel at the immensity and grandeur of our world, and with a packed lunch, take a four-hour sight-seeing boat trip up glacial Lake Chelan to Stehekin outpost. I would sit on the back porch in the rain and work on the New York Times Sunday crossword puzzle, and watch humming birds quiver around the feeders when the sun came out. I would find a Washington Mutual Bank in Omak, 40 miles away, and get my nails done on the same trip. I would congratulate myself on not reaching a state of panic when I woke up at 2:00 am and thought I was blind because it was so dark that it didn’t matter if my eyes were open or closed. And then I would scramble for a flashlight in pitch black terror and phone the electric company to ask if there had been a power outage.

I would stroke Cricket, who found me sooner than four days after my arrival, and who sat on my lap and purred despite her fear of humans. I would tend Cricket as her health declined and sadly caress her on her final days and feel her soak up all the love I could give her in her last home under the majesty of the Cascade Mountains. I would take her to the vet and stand beside her and hold her as the difficult but necessary decisions were made to relieve her of her pain and misery. Then I would drive back to the cabin with an empty cat crate knowing that Carol’s buddy of 17 years would not be there when she returned home to sneak up on her and snuggle again.

I would read books, write in my journal, walk along the river, drink champagne, sleep when I felt like it, and wear red. I would create savory meals while sipping martinis or white wine bottled in Wenatchee. I’d make fresh vegetable soup and seared ahi tuna with asparagus and BLT’s with fake bacon, and an abundance of scrumptious baked Italian meatballs, so many meatballs that I’d eat them again and again with spaghetti or as hot sandwiches or just plain cold, straight out of the refrigerator.

I would stand on the mountainside and look down along the green and orange vastness of the Methow River Valley and thank my lucky stars that I had this opportunity to live here by myself for a short, beautiful time. And I would forever treasure these moments of my journey into self-hood, self-discovery, self-sufficiency, and self-appreciation.

When my senses detect even a hint of oregano or basil, this memory wafts over me and takes me to that little cabin on Bitterbrush where I rejuvenated my soul. 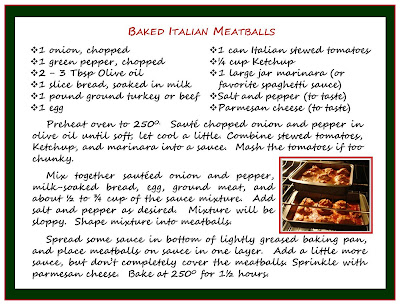