THEME: PAYING ATTENTION
I think the one lesson I have learned is that there is no substitute for paying attention. ~ Diane Sawyer 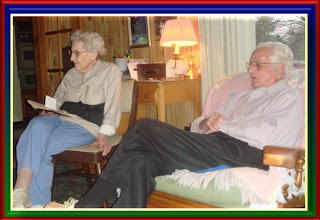 My mother and father-in-law, Mary and Clint Searl, are 94 and 95 years old. They are in such good shape - body, mind, and soul - they could put most teenagers to shame. They'd probably tell you they're getting too old for this or too tired for that, but they have spunk and spirit and drive and a boatload of positive energy – the kind that adds spark to life and makes children giggle.
They tell the stories of their lives, most of which they've told many times, but which I never tire of hearing. Mom, the daughter of Austro-Hungarian parents and the eldest of ten children, growing up on a New Jersey farm. Dad, one of five children, growing up in a New Jersey mill town. They tell their stories, and I ask questions to stretch the details.
Mary and Clint live on Faulk Road in Wilmington, Delaware – close to the Pennsylvania state line - in the same house Dad built in 1950 for $5000. For years, until Delaware and Pennsylvania changed their northern border, Mary and Clint's back yard sat right on the state line - the arc known as the Twelve-Mile Circle - just east of the Mason-Dixon Line. Dad was dismayed when the two states moved their border away from his property line. Dad liked his deed the way it was. "Big part of history," he said. Eventually, and with great reluctance, Dad changed his deed to match the new boundary once he realized the muddle an out-dated deed would create for the executor of his will.
Until a few years ago Mom and Dad kept a lush vegetable garden - corn, squash, lettuce, tomatoes, beans, asparagus, peppers, peas – which were eaten right off the vine or jarred or canned or jellied or stewed or pureed for future home-made dinners. They cultivated their yard with maples and holly trees and elms, many of which Mary planted herself when she found sprigs out on the back roads.
More recently, Mom and Dad find simpler tasks to satisfy their need to be productive. They don't do the outdoor tasks much anymore – they've given up gardening, mowing the lawn, and plowing the snow. But Mom does Cryptic Byword every day and still makes lemon meringue pie. Dad continues his interest in stamp collecting and anything related to history.
My husband, Ed, phones his parents every day. He talks to his mom at great length about anything and everything – recipes, gardening, TV shows, the Pope, pedophile priests, condoms, corrupt politicians, lack of moral standards, and, of course, football and baseball, which Mom follows almost as much as Ed does, especially the Philadelphia Eagles and the Phillies. Then, when his dad gets on the phone, he and Ed discuss mechanical or technical issues – the importance of this engine, that genealogy, or the other form.
I usually don't get involved in these regular phone visits. The other day, however, when Ed was talking to his dad, I heard my name mentioned. When he hung up, Ed said, "Dad sent you something in the mail. He didn't say what it was, but he wants you to call him as soon as you get it."

The something I received highlighted Dad's appreciation for my writing. It was like getting a pat on the back in the mail. The envelope contained a greeting card with a photograph of Mary's garden, taken by my sister-in-law, Natalie Searl. Inside the card was a short note from Dad and a folded yellow legal-sized sheet of paper. The note read: Ellie, I scribbled this for something to do this morning. I figured it would be a good test of your skills in word usage. Dad.
On one side of the legal paper was a pen and ink illustration. On the other side was an accompanying story about Spot– the brown and white Springer Spaniel the family owned when Ed was a kid – and how Spot saved a lady's life one winter day during a terrible blizzard.
I knew the family had a dog when Ed was little, but Ed never told me much about him. I figured either Ed hadn't spent much time with Spot or too many years had diluted the memories. "Do you remember much about Spot?" I asked Ed. "Did you play with him?'
"He was an outside dog," Ed said. "He had his own house. Pretty much all I remember is I had to put him to sleep when he got cancer."
I phoned Dad to find out what he wanted me to do. As I figured, Dad wanted me to write up the story in a fashion that would highlight Spot's tenacity, his quick wittedness, his determination to get Mary's attention so Mrs. Gaynor would get some help. Dad didn't think he had captured the essence of the story in the little he had written. He wanted readers to see and feel the action.
He thought I could take his wording and his illustration and write a story that would zoom in on the dog running back and forth between the lady in the snow pile and the side of the house, stretching the chain, dragging it in the snow, yipping and barking and pointing, trying like mad to get Mary to notice him from her window.
But I think Dad told it quite well. And the precision of his illustration makes it complete.  Here it is in his own words – exactly:
"Spot Saves a Human's Life" 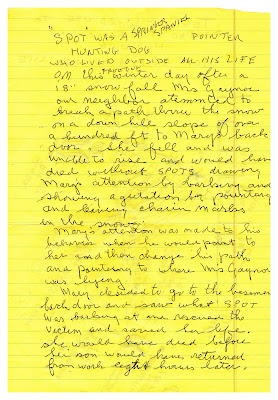 "Spot was a Springer Spaniel hunting dog who lived outside all his life. On this freezing winter day after an 18" snowfall, Mrs. Gaynor, our neighbor, attempted to break a path through the snow on a down-hill slope of over a hundred feet to Mary's back door. She fell and was unable to rise and would have died without Spot's drawing Mary's attention by barking and showing agitation by pointing and leaving chain marks in the snow.
Mary's attention was made to his behavior when he would point to her and then change his path and pointing to where Mrs. Gaynor was lying. Mary decided to go to the basement back door and saw what Spot was barking at, and rescued the victim and saved her life. She would have died before her son would have returned from work eight hours later." 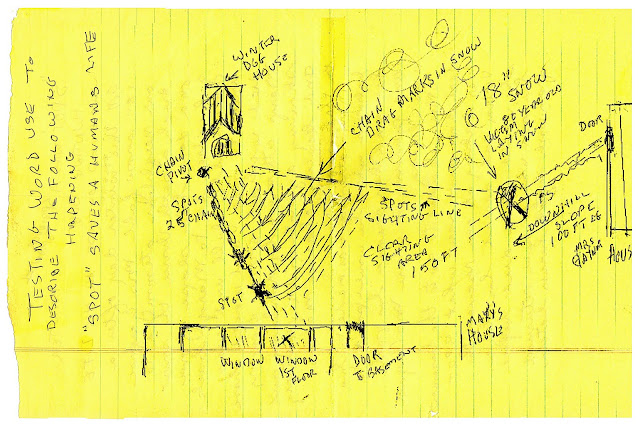 I was thrilled that Dad thought enough of my writing to want me to fashion his story into a tale he thought he couldn't tell. However, if I had rewritten it, it would have become distorted, no longer a vision of Dad's memory, no longer a story straight from his heart that he could relate – with full ownership and authentic emotion - when people gather around the table over Mom's lemon meringue pie.
We all have stories to tell, and they are best told in our own voices. Maybe Dad will be dismayed that I chose not to rewrite the story of Spot's heroic rescue. But I'll bet Dad will be glad when I ask him to tell that story again – in his own words - the next time we visit. And his story will be spot on.
EVS 01/11
Posted by Serendipity Authors at 6:03 PM