OUT OF THE ASHES - It's best to have failure happen early in life. It wakes up the Phoenix bird in you so you rise from the ashes. ~ Anne Baxter 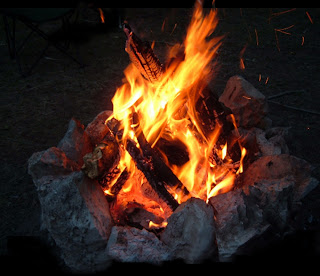 Camping became our temporary way of life in June, 1970, when Ed, our almost-two-year-old daughter Katie, and I left our townhouse in Burlington, Vermont, and crossed the border into Canada, thinking we'd never return to the States again. As many readers already know, we had left our country for Canada because we didn't support the war in Vietnam.

For the next three months, our home was a tent, picnic table, and campfire in a string of campsites through Quebec, New Brunswick, Nova Scotia, and back again to Ontario. Camping with my family in the Quebec Townships and the Eastern Provinces that summer gave me a euphoria I hadn’t expected. The beauty of the Canadian countryside, combined with the joy of finding security in a new land, eased much of the grief I felt about burning bridges with our country, our neighbors, our friends, and our families - especially our families.

No one, aside from my brother Dick, knew we had left the states, and it was beginning to wear on me that I hadn't informed my parents we would live and work in Canada until the US Selective Service overturned its decision to reject Ed’s application for Conscientious Objector status – probably forever. Ed had told his mom and dad soon after we reached Montreal. They were distressed about their son's life-altering decision, but supportive and accepting nonetheless. My parents, on the other hand, would probably not be so generous. My father in particular. He wasn't the accepting type. He followed a strict set of societal conventions - conventions he designed, which included everything he did or did not personally endorse, regardless of the standards held by rest of the world. I figured our blatant act of unpatriotic behavior would push him so far over his acceptability edge, he'd be apoplectic. Ed and I decided it wasn't wise to explain our fugitive actions over the phone; it would be far more prudent to tell my parents face-to-face.

We set up our tent in a downpour on a wooded hillside in Fredericton, New Brunswick, and climbed into the warmth of sleeping bags. We read stories to Katie and listened to the rain pound against the canvas. When Katie fell asleep, Ed and I talked about how and when to tell my parents. It was time. I'd leave the next morning, and I'd take Katie with me so my parents could hold their granddaughter prior to the death knell of future visits to their home.

The rain beat down as Ed helped me pack the car and settle Katie into her seat.

"Be safe," Ed said, and we started the long journey to my hometown - 520 miles of two-lane highways through western New Brunswick, Maine, New Hampshire, and Vermont, across Lake Champlain on the Essex Ferry to Westport, New York. The ten-hour trek in the rain heightened my anxiety. When mountains didn’t interfere with radio reception, music and local programs helped tamp my fears. Would we make it back to Ed safely? Would Katie be okay? Would I need car assistance? And to make the trip more nerve-wracking, my imagination played a continuous tape of the agreed-upon explanation of our decision to leave the US - to make Canada our permanent home.

I envisioned my parents’ overarching disapproval. I conjured up the reproaches, the arguments against our decision, the interrogation: What if you're arrested? Why can't Ed be a medic without arms? What will you do for money? Where will you work? How will you live? When will you come home? When will we see you again? I didn’t have answers to most questions. We could explain our war resistance decisions, but Ed and I hadn’t taken the time to address the issues of future living. Our one-step-at-a-time philosophy had given us enough courage to drive into Canada with the few items that would fit into our Chevy, shop at the Hudson Bay Company for supplies, and drive into the hinterlands of the Eastern Provinces – as though we were tourists on a very long trip.

Katie was a good car traveler. She switched between cooing and sleeping, waking long enough for a jar of chunky chicken and carrots, a couple of Arrowroot crackers, some tepid milk, and one diaper change - potty training not a viable option while using public toilets, camp ground outhouses, and a portable folding john with a disposable plastic bag clipped under its seat.

I put Katie to bed and joined my dad and mom on the kitchen porch. They rocked in their wicker rockers and watched the rain bounce off the porch steps. I sat on a side bench and tried to make small talk. At first, I considered pretending all was well, inventing stories about drives through the Vermont countryside and idyllic picnics on Three Brothers Islands. But I couldn’t bear the suspense. I blurted out my rehearsed anti-war, anti-draft message.

“Last September, Ed decided to become a Unitarian minister," I started. I cleared my throat, not knowing how my parents were about to take the next part of the surprise. "We don't approve of the Vietnam War, so Ed applied for Conscientious Objector status, telling the Selective Service that he intended to be a Unitarian minister. And last week he got a letter from them. They turned him down. Said he was being “expedient – ‘cause he’s a Catholic, and Catholics don't aspire to be Unitarian ministers." My nose ached. I could feel the tears collect. I didn’t want to cry. I wanted to be strong - sure of myself. If I had to answer questions, I wanted to be on top of my game. This was the hardest thing I ever had to tell my parents. "Then Ed got his draft notice," I said.

“Remember three Saturdays ago when you guys invited yourselves to lunch?” I continued. “Well, the day before that, Ed was supposed to report for induction into the draft - we were all packed and ready to leave for Canada. We went the next day instead. We’ve been camping across the Eastern Provinces ever since. Ed’s waiting for us now in Fredericton, New Brunswick - at a campsite.”  I breathed again.  And waited.

Silence.   Mom stopped her chair and looked at her hands. She wiped her eyes. I could hear the continuous splat of raindrops into puddles and Dad’s rockers squeaking over the wooden slats - back and forth, back and forth - like a metronome clicking the beat of expectancy.

Then Dad, who hated defiance, who riled against disrespect and shameful behavior, said, "If I were in your position, I'd do the same thing."

If ever there was ever a moment of glory, that was it - my dad showing unconditional approval of an act of what some called national treason. My heart softened for this man who had, for years, hidden his own heart under a boat-load of reprobation and disparagement.

Mom nodded, then shook her head. "Well," she sighed. "I guess we won't be seeing much of you then." She looked at me. "What about Katie?" She asked, as though Ed and I would send Katie down-stream in a basket while we made a new life on the other side of the border.

As the evening stretched toward midnight, we talked about the possibilities and pitfalls of making a life in a foreign, albeit similar, country. I answered as many questions as I could and marveled at the calm with which my parents accepted the news of our decision and the significant lack of day-to-day strategies to make it a success.

The relief was palpable, turning my trip into an adventure, giving me hope for the future. Katie and I sang songs on the ten-hour ride back to Ed, who, regardless of the rain, would most likely have been enjoying his own adventures hiking through the woods or walking along the back roads of Fredericton.

We arrived late Sunday evening - tired, relieved that the skies had cleared, and happy to be with Ed again.  Katie saw him first.  She ran to where he was sitting  - on the bench of a picnic table, huddled half-naked inside a sleeping bag.   Aside from walking to the outhouse with a towel wrapped around him, he had stayed the entire gloomy, rainy weekend in the tent - cold, wet, and miserable. Before Katie and I left for the weekend, we had placed a food-laden cooler and the water container into the tent, and the stove and kitchen supplies onto the picnic table, so Ed would have what he needed for at least three days. However, in our haste to get the explanation-party on the road, we had neglected to take his clothes out of the trunk. All of his pants, shirts, and jackets were in the back of the car as it made its way to New York and back. We had left Ed with enough to eat and drink, but nothing to wear save a tee shirt and a pair of red plaid boxer shorts.

Only Ed can tell you how it felt - stranded without clothes, semi-protected by a leaky canvas covering - for three days in the rain. His delight at our return rivaled the elation at finding a six-pack of Genesee and an all-night diner when lost for a month in the desert.

Despite Ed's discomfort, the news of my parents' unconditional acceptance at our decision gave us enough high-octane emotional fuel to continue our journey into the unknown. In September of that year, we became Landed Immigrants of Canada, rented a nice apartment on the Richelieu Canal outside Ottawa, Ontario, and found decent jobs. When we moved to Montreal in 1971, Ed enrolled in theological school at McGill University, I landed a job at Marian Hall, a youth protection home for girls, and Katie learned how to shop in French at the Farmers Market..

In 1973, Ed received a letter from the US Selective Service - he had been placed into the draft lottery system, and because his number wasn't called, he was no longer a candidate for the Draft. Apparently, FBI investigators reported that Ed had begun to study for the ministry - and Senator Patrick Leahy, then Vermont State's Attorney for Chittenden County, Vermont, refused to prosecute.

In the summer of 1976, the bridges rose from their invisible ashes, and we returned to live in the US, where Ed has been a Unitarian Minister ever since.