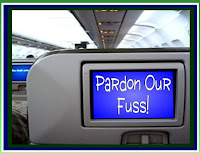 The older couple sat beside me in Row Three - wife in the middle; husband at the window.

The lady’s head looked like a camel molting in late spring. Sparse patches of short, reddish-brown dyed hair with muddy, grey roots stuck out of her head in clumps; a bald spot highlighted her crown. She wore a rayon turquoise outfit, sensible brown shoes with Velcro straps, and lots of costume jewelry.

The husband matched his wife’s lackluster style with his tousled grey hair and lumpy beige suit. He slumped so far into his seat I could barely see his face. He mumbled something to his wife.

“They’re down there.” She pointed to a pink, quilted bag under the seat in front of her.

He reminded me of my father – asking a question but oblivious to it when it was answered.

I could hear them shout at each other over the roar of the JetBlue engine and my headphones, which were already turned up several notches so I could watch “Real Housewives of Orange County” on the little TV above my tray table. The title of that show is a misnomer. Reality shows like OC Housewives don’t reflect real anything. They’re orchestrated and semi-scripted by the producers to titillate the audience with exaggerated drama, turmoil, and superficial, yo-yo relationships of fatuous non-actors. Seldom in real life are people’s everyday activities packed with such absurd behaviors and outrageous upheavals as those represented by these OC women, at least not in my experience. I don’t really approve of the show, but it’s fun to watch with my daughter for the ridicule factor, and I figured it would be good entertainment for part of my four-hour plane trip back to Chicago.

The flight attendant looked at our row. She moved toward us just as a tall, thin woman shot into the galley, arms flailing, head thrust forward, spewing something at the attendant with such intensity I thought she needed medical attention. Her outfit screamed pay attention to me: black beret, sunglasses, fur-lined leather vest, skin-tight shirt and jeans, brown suede boots, and gold metal purse slung over her shoulder. The attendant held up a snack package, and they studied the nutritional values on a bag of sweet-potato chips. Just some diet issue. Apparently satisfied, the long-limbed woman returned to her seat in the back of the plane.

An armful of bracelets clanked as the wife extricated her bag from the metal rungs. She hefted it with an audible “umph,” trying to keep it from toppling back onto her feet.

“Help me hold onto this thing.”

I tried to concentrate on the OC Housewives with their annoying outbursts and communication breakdowns. The scene I was watching had Vicki telling her husband, Don, that he wasn’t allowed to accompany her and her children on their annual Mexican vacation because, “It’s always been a tradition that it’s just me and the kids.” Of course, Don’s feels left out, and Vicki tells him to “Get over it,” but then she tells the audience that Don doesn’t fill her ‘love tank.’ There are times I feel compelled to shout at TV, and this was one of them. “Do you hear yourself - you sniveling, narcissistic twit?”

“PUT THE DAMN THING DOWN FOR CHRIST'S SAKE!” He slammed his hand on his knee.

The lady plopped the bag onto our shared armrest, shoving it into me, grumbling something about ‘always complaining.’ She unzipped the bag and dumped bananas, packages of peanut butter crackers, baggies of pretzels, goldfish, raisins, and wrapped caramels, and a couple of juice boxes into her lap. And into mine. I returned her bananas, caramels, and leaking juice box.

“Oh, I’m sorry, dear. Here let me get that.” Her bracelets rattled as she pulled a wadded tissue from under her cuff and began to mop juice drippings off my fingers.

“Really, it’s fine,” I told her, pulling my hand away from her and her used Kleenex. I turned up the volume on my headset.

She leaned toward her husband. “What do you want to eat?”

Just about that time, the mysterious woman charged up the aisle again, parked herself inside the flight attendant’s personal space, dramatically placed one hand on her hip, and wagged the finger of the other hand back and forth an inch from the attendant’s nose. The woman pointed down the aisle and spouted something with such acrimony I doubted it concerned the nutritional values of sweet potato chips. The attendant maintained a calm demeanor, but her furtive glances indicated she was reconnoitering escape routes. After a few minutes of the harangue, the irate passenger huffed her way back down the aisle. I was sorry I couldn’t hear this verbal exchange. I figured it was far more fascinating than the one beside me.

“YOU WANT I SHOULD PEEL IT, TOO?” She ripped off the stem of the banana, but he grabbed it before she could pull down the first strip.

I looked around to see who besides me noticed this confluence of noise and activity in the front of the plane. But most travelers were otherwise occupied – reading, watching TV, sleeping, all with earphones firmly attached to their non-attentive ears.

I stared at TV, hoping it would discourage the shoe commentary. It didn’t.

“Did he wear shoes he could take off? No. What does he wear? He wears those tie shoes that he can barely bend over to tie in the first place. Has to sit down to tie and untie his shoes. I told him to wear the shoes with the Velcro straps. Like mine.” She lifted her left foot and pointed. “ Now, I wore my shoes with the Velcro straps. See, they’re easy to get on and off. I wear ‘em everywhere – even to the Doctor’s office. Did he wear his? No. He had to wear tie shoes. Didn’t hear a word the security man said to him. ‘TAKE OFF YOUR SHOES!’ We kept shouting at him. ‘TAKE OFF YOUR SHOES!’ Lord, I wish he’d just go to sleep. Would you like a snack?” She held up a baggie of raisins.

“No, no, thanks. I’m just going to watch a little TV and then take a nap.” I turned my attention back to OC Housewives. Vicki and Don were at a fancy restaurant. Vicki wiped her eyes with her cloth napkin. “I need to know you love me. Can’t you tell me you love me?”

I felt a hand on my arm. “Where are you going, honey? You live in Chicago? Our daughter lives in Chicago. Not the city. The suburbs. She just had a baby. Girl. Named her Colby. Can you imagine? Naming a baby after a cheese? I hate to say it, but the poor kid looks like a squirrel. You like Chicago? Jack hates Chicago. I don’t know why he bothered to come this time. You sure you don’t want something to eat? Here. Have a banana.”

“No, really. I’m not hungry,” I lied. I was very hungry, but I didn’t want to share iffy food packed under doubtful circumstances by people who thought bananas on a plane were appetizing and called their baby grand-daughter a squirrel.

The high-maintenance woman shot up the aisle again, this time in a stomping rage, screaming, “Why the Hell hasn’t someone found me a fucking better seat? Christ! What do I have to do? Kick some asshole out myself ?”

In a swift second, three flight attendants moved in and stopped her next to my row. “Ma’am, we’ve already told you. There are no more available seats. I’m sorry, but you’ll have to remain where you are. What is the problem with it?”

“Well, it’s next to a baby, and I don’t like your rhetoric!”

“I’ll move!” I shouted at them without thinking. The aisle confab, startled into silence, looked at me with bewilderment. I lowered my voice. “I’d be more than happy to switch seats. Please, sit here.”

And without giving anyone time to refuse, I gathered my things, stood up, and waited for new seat instructions. My seatmate looked baffled. “You okay, dear? Can I help? . . . You’re . . . leaving?”

The last thing I heard on TV before I took off my headset was Jeana trashing the 'new girl' -“She’s lucky she didn’t get bitch-slapped!”