Leaning against the center column of the kitchen porch, he looked at me with that forlorn, Eeyore pout. His glass eye roved off to the left while the other one welled up with tears. “What about me? What’s going to happen to me?” He shuffled to his barcalounger and slumped into the sanctuary of sculpted dents. Years of lethargy had molded creases into the grey vinyl upholstery, shaping the di 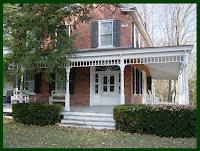 rt-encrusted plastic into the exact contours of his body. The solace of familiarity didn’t ease his distress. He slowly leaned his head back into the depression of the top cushion and moaned.

I never quite understood why Dad wanted his recliner on the kitchen porch. We owned elegant, though aged, white ladder-back rockers and wicker chairs, which graced the wide covered veranda on the side of the house overlooking the lake. But Dad wanted to sit with his Scotch on the rocks and watch traffic in comfort, even though there wasn’t much traffic to watch. An occasional car tumbled out of the mountain road beyond our house and sailed down the hill to the little village below. Farmers in rusty pick-ups tipped their hats, and truckers hauling silage honked. If Dad were in a good mood, he’d lift his drink, spilling his cheap Scotch on his pants. Otherwise Dad complained that they should “Slow down!” or “Quit kicking up our gravel!”

One summer evening, while the family attempted small talk over before-dinner drinks, an out-of-towner stopped just beyond our property line to admire the orange and purple sunset, the colors shifting and slicing through the mountain tops past our meadows. “What’s he doing? His tires are on the edge of our grass. He’s trying to make me mad.” And then the excruciatingly familiar suffering sigh: a belabored intake of breath through clenched teeth, followed by a slow, heavily grunted exhale. An exaggerated swig of his drink exhibited finality to the event, like an exclamation point giving authority to his pronouncement

A ‘Fred testimonial’ was meant for us to take notice, and it demanded a response. If none came, there was a ‘Fred coda,’ which took the shape of a loud “Hmmm?” as in “Don’t you agree?” Nobody did. Eventually someone broke the silence and tried to show reason, which was actually appeasement: conciliatory comments to mollify Dad until his Scotch could kick in and he’d fall asleep in front of TV after dinner. But in our heads, the small talk became big thoughts - big with stress, big with anger, big with resentment - thoughts that each of us had and shared in private but never dared say out loud in front of our father, or mother, for that matter. At moments like these Mom had her own excruciatingly familiar sigh, only hers was shallow and slightly sing-songy, as though she had just seen a baby bird fall out of its nest – a helpless, pervasive sigh. But true to form, she’d fake a laugh and say something witty to lift the melancholy that hung over us like a sunset gone to seed.

Dad had a college degree in civil engineering; he was a skilled land surveyor; he showed artistic ability in oil painting, sketching, map-making, and embroidery. He cultivated beautiful gardens with lush string beans, sweet beefsteak tomatoes, and exceedingly huge zucchini. He enjoyed baking bread and making German spaetzle noodles with sauerbraten, and in the summer, he’d husk corn. So what happened?

Dad was a personal contradiction wrapped in a heavy-set, six-foot, three-inch bulk of a man, whose central belief of life and how it should treat him stopped developing when he was in those self-centered teenage years of supreme narcissism. At sixteen, the Me First syndrome is expected and humored. At any age beyond twenty-five, exhibiting childish, self-absorbed behaviors is an embarrassment. Dad was stuck in the expectations of teenage-ness, looking toward others to fill his bottomless happiness glass. That’s it. Mostly he just liked to be waited on.

For Dad, being waited on meant guessing what he wanted and getting it for him before he knew he wanted it. His adolescent self reared its head during these gimme gimme episodes. There was hell to pay if Dad saw someone with a treat and his TV tray was empty. “Is that ice cream?” He’d ask in his half-sleep, half-sober whine. Then came the follow-up grievance call. “Can’t a guy get a dish of ice cream around here?” Not a proper request that showed a touch of respect, but a command designed to corral the nearest family member into action. When it was my turn, I addressed the situation in silence: stomach in knots, head pounding, face twisted, and hands scooping ice cream into a bowl for the head of the family lazing torpidly in the beige, tufted den recliner while he watched TV with one glazed eye and yelled “Oh, for Pete’s sake,” if the music got too loud.

When the world behaved properly for Dad, life for the rest of us paced along smoothly. So, to the extent that we could, my two older brothers and I provided opportunities to orchestrate good cheer and lighthearted humor, no matter how emotionally counterfeit the efforts. Pretense was a matter of course. “Make him laugh, and keep us happy.” That’s how we functioned. We complimented his freshly grown vegetables. We oohed and aahed over his homemade bread, spaetzles, and sauerbraten. We made dinner table jokes that corresponded with something he liked. The jokes became traditions. Dinner was calm if we had rice. “Rice is nice.” Dad was particularly partial to that one. It matched a rice commercial that made him laugh, and referring to it meant we cared about him. So simple, yet so therapeutic.

Peace at the dinner table took an ugly turn when the phone rang, or the meat was tough, or my brother’s best friend, Tim, came to the kitchen door. “Why the hell does he always have to show up at supper time?” Then, stomach in knots, head pounding, face twisted, and hand clenched onto my fork, I’d finish my meal in agitated silence. Dad sighed his insufferable big sighs, Mom sighed her pathetic little sighs, and my brothers and Tim ate dinner in the den.

Children aren’t equipped to understand or analyze their parents’ behaviors. I knew Dad had a terrible accident during a wood chopping incident in his early thirties when an errant piece of tree bark flew into his left eye, blinding it instantly. Dad used to complain about his lack of depth perception, but other than that, I never gave his eye much thought. I was used to it. I also knew that Dad was an only child who had been doted upon by his mother and bullied by his father.

Perhaps Dad’s disgruntled behavior was due to his ill-fated, debilitating experience. Or perhaps he lingered in those coddled, only-child stages of youth, waiting for a mother figure to lift all stress and anxiety from his world, and still seeking approval from some non-existent supportive father figure.

Whatever the reason, he was rendered helpless. Dad couldn’t meet the ordinary challenges of finding fulfillment or gratification in everyday occurrences. He couldn’t overcome the all-encompassing hopelessness that continued throughout his lifetime - a lifetime spent drinking Scotch, earlier and earlier each day, letting his garden wither and his artwork dwindle. Did he ever notice that he had three beautiful children, a generous, although submissive wife, and a great deal of talent? Did he know he became an unlovable man?

When I still lived at home, I never confronted him – ever. I was too afraid – afraid of his intermittent love-hate affair with the world he built around him and us. Afraid of his unpredictability. Afraid of his ambiguous, yet omnipresent disapproval that interrupted the equilibrium I tried to grasp and manage in his presence. Whose responsibility was it to build our relationship? If it was mine, I failed. If it was his, he failed.

And so at his worn-out age of seventy-two he wanted to know what would become of him. How would he manage? There he sat in that hideous lounge chair, swirling his Scotch, spilling it on his pants, looking pitifully at the porch floor boards wondering who would take care of him now that Mom had her arm in a sling because she ripped her rotator cuff playing golf. What a sad sight. He’d never change.

But I had. I had found courage. No stomach knots. No head poundings. Nothing clenched. Just a few words forming along with a twisted smile. I couldn’t resist.

“Lighten up, Dad. You still know how to pour your own Scotch.”

I turned and walked into the kitchen, letting the screen door slam behind me. I have no idea if he sighed or what he said, if anything. It didn’t matter.